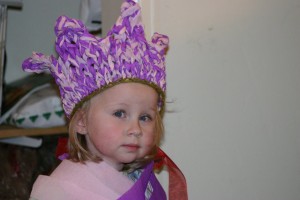 So the crown from Alterknits isn’t done – but it is wearable. I have to get some ribbon to replace the waste yarn on the bottom I used to cast on. (The dark green wool kind of throws the whole thing off, don’t you think?) I’d like to add some beads to it also for a little sparkle.

Baby Girl was pretty excited to wear it though. She had me wrap her in the left over crepe paper like a dress, then find her tutu and turn on the classical music so she could dance. The whole scene was pretty fabulous. 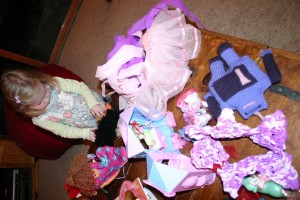 I have to say that I never expected this – after having been a bit of a tomboy growing up – I never thought my life would be so pink and purple. She does it with such style that I’ve never had!

Knitting note: Baby Girl picked out pink and purple crepe paper for the crown so I had to increase to size 15 needles to accomodate the extra bulk. I also decreased the number of stitches around from the pattern to fit her head. It’s a little bulky so it would be fun to try again closer to the original pattern, but it’s pretty durable for knit paper which is great for an almost 3-year-old.