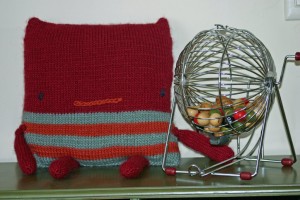 Squarey loves playing bingo! Who knew – maybe it’s because he looks so good while doing it.

So a couple weeks later then planned (as most knitting projects go), but completed.I’d like to think that I could knit more gifts, but with a project a month that’s tough. Some parts worked out better then others, but The Boy and Baby Girl both love him already so that’s whats important. He was already upstairs for nap time today. (He had to be stolen from the babe’s arms to get his picture taken.)

Another Jess Hutch object complete. I’d still like to make Spherey and the little odd fellow. It’s just too fun to make little creatures. I’ve started the crown from Alterknits though which I’m really excited about – maybe I’ll even finish this week – that would be some sort of record.