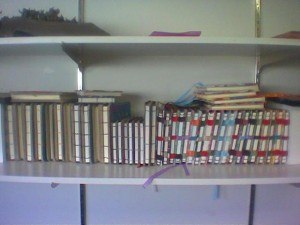 We had a fabulous Thanksgiving weekend – with snowboarding and shopping and eating and lights and concerts on the mountain. So much fun!

I did a little knitting, but mostly I made books.

This weekend I have two holiday shows so I have to make enough inventory to cover both. I’ve got 45 books ready to go and about 24 small bingo books in process – oy! Only a few more nights left to make books… 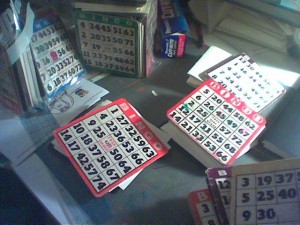 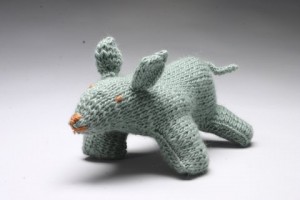 Right now I have three knitting projects in the works…

I have half a bunny from a design by Kate Gilbert. I ran out of yarn though and need to get back to Michael’s (the closest one is 2 1/2 hours away).

I swatched and started the Girlfriend’s Swing Coat Sweater from Wendy at Knit & Tonic. I realized that it was way too stiff though – undid the whole thing and just finished a swatch on bigger needles.

And most likely to finish next – I have a robot from Jess Hutchison’s fabulous new booklet. Jess knits up most of her creatures in Lamb’s Pride worsted. This past summer I knit Baby Girl a dog from Lamb’s Pride and it’s really great for animals. I got the pattern from a book on kids knits (I’ll have to figure out which one) – in the end I think it really looks more like an aardvark. 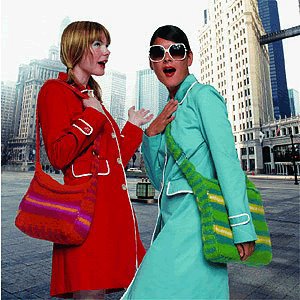 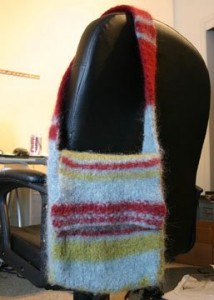 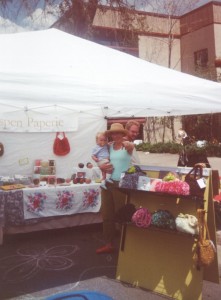 So in the summer I have a booth at the local Farmer’s Market with a few friends. That’s a picture of me and family in the booth last summer. We made a few changes this summer, but that’s the basic idea.

The first two summers I sold handmade journals and cards. This summer I added pillows.

For the holidays last year The Boy got me the all eBay all the time cool craft presents – a gocco printer, old letters, photographs, foreign money etc… I was in love with some of the old pictures and really wanted to use them. So I transferred them onto fabric and made pillows with them. I thought some people might want those pillows and then I had cards to hand out if you wanted to customize the pillows with your own pictures. 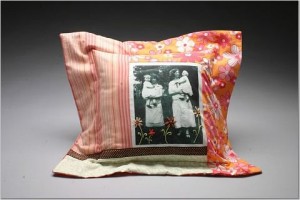 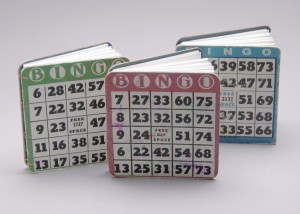 I’m starting a blog – because I can’t read enough knitting, crafting blogs right now and I feel like I’m missing something…