In a previous life I built props for theatre. At any of the theaters I was at I ended up being the fake food maker and cake decorator. You make a foam cake and then decorate it with some weird plasticy stuff – I can’t remember. My stage cakes looked pretty good – but I never got into decorating real cakes. 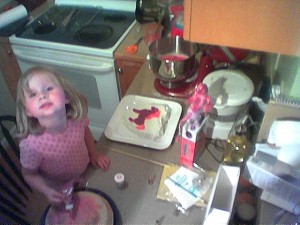 So, for Baby Girl’s birthday she wants a ‘my little pony’ party – easy, no problem – Target has all the stuff. Somehow though, the grocery store – who has every kind of character cake imaginable – doesn’t have a ‘my little pony’ cake. So when we were away last weekend I bought the cake decorating kit at Michael’s. I thought there would be enough instruction to figure it out. The kit came with lots of great stuff – BUT NO BOOK! That’s why I bought the kit! Oh well – we did a trial run today, to get ready for next week. It’s a little standard and hokey, but she was pretty happy and I think in the end it’s kind of cute for a 3rd birthday. 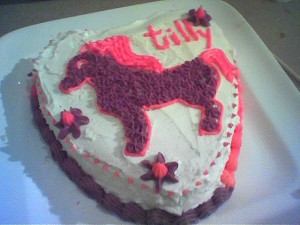 Next week it will be a big sheet cake. I used Martha Stewart’s yellow cake recipe and the frosting is from the KitchenAid cookbook that comes with the stand mixer. I also bought the concentrated icing color at Michael’s – I might need to use a little less for the real cake!

disclaimer: all photos today were taken with the camera phone.